Tour de France with the Schutzman's

I enjoyed a thrilling ten days with the Schutzman family in Northern France and Belgium from October 11 to 22, 2016.  Bev had some ideas of sites that each and every family member would enjoy so we were off in our private van to see what we could see! 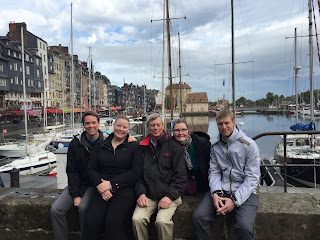 We navigated out of Paris toward the countryside in the Loire Valley, then headed northward toward Brittany and Normandy.  Some of our destinations were new to me and others were favourite places to return to such as St. Malo and Mont Saint-Michel.  Ypres is a fascinating city, rebuilt in it's original style after WWI took it's toll.  We finished the tour in lovely Bruges with three days in the city of canals.  We attempted to try all of the beers (450+!) to accompany the chocolate, candy and frites.

There was no need to translate in French for this group. All were bobbing their heads in agreement and understanding on the first night in the Loire Valley when we were welcomed by our dinner hosts at the Manoir de la Giraudière. The origin of this Manoir's name is still to be discovered, along with the torture instruments in the Chateau de Chinon..... this is probably ok anyway.  We saw several castles and conquered most of them too! 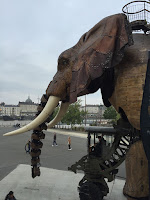 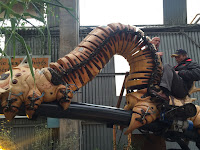 At each new engineering marvel, Bob would.... marvel.  We took a detour to Nantes to see the Isle des Machines, an adventure park in the shipyard.  Here we got to ride a giant elephant while it took a tour of the harbour and sprayed small children as it lumbered forward.  In the 'atelier' machine factory we discovered a spider, a flying heron and we got to drive a big ant.  Bob volunteered to take a spin on the 'chenille' caterpillar and he definitely drove it like he stole it, even in reverse! 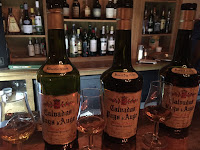 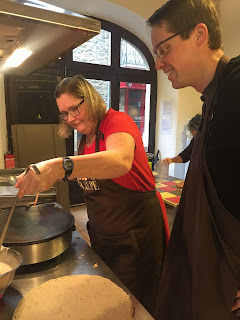 We tasted apples- oh so many apples..... and pommau and cider and calvados.  We washed down the moules and frites and cheese and crepes.  Kate found the best mussels at the Lion D'or in St. Malo, and Bev signed us up for the Atelier de la Crèpe, a lesson in making sweet and savoury buckwheat crepes! Mon dieu is it ever difficult! After several attempts and piles of flops Kate emerged as the champion. We got to enjoy a proper galette luncheon made by our teacher Marie Laure, a native of Brittany.

Bev shared with us her favourite pastries such as 'Kouign-amann' and chocolates to be enjoyed in the van.  I, the driver, felt well fed at all times. Fed not only with apples and cheese and sausage but of route notifications from my co-pilot, Tom.  Thank-you Tom, for getting us through Paris in the fog of your jet lag, and for your patience when I 'didn't like' the route you suggested!  Thanks for taking the wheel to spell me off too, mucho apreciado! 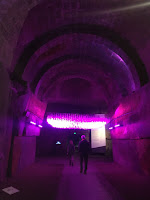 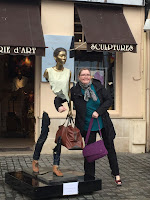 Around every corner there was a surprise; we met the organ player of the St. Cathrine's Cathedral in Honfleur and we got to tour and tinker on this enormous organ built in 1775!  The astonishing art at Ackerman Caves had us aglow with wonder, and Kate took an inadvertent dip in the bubble fountain of Arras.  To top it off, we were honoured to be toured around Bruges in the boat of the silliest Captain in all of Belgium! 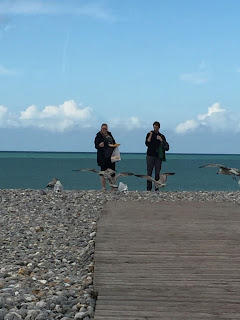 Jonathan was the historian and enjoyed the WWI and II sites immensely, even amidst the drizzling rain in the Ypres salient. A stop at the D-Day landing beaches had us explore the bunkers of the allied adversaries at Juno.  The 360º circular cinema told the story of the end of the second world war with the effort of our Canadian compatriots.  We enjoyed a 'traditional kebab' picnic on the beach at Dieppe before spending two days in the extraordinary town of Arras to visit the Vimy Ridge Memorial, just 6 months before the centennial celebration of this turning point toward allied victory in WWI.  In Belgium we visited the German pillboxes that became John McRae's makeshift hospital in Flander's field, a far cry from the Saskatoon Hospital and workplace of Jon, the doctor 'in residence'. 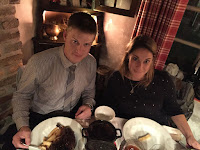 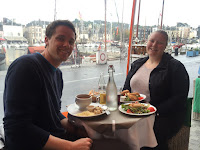 Bob wore a suit for the flight on airplane AND caterpillar.  Tom was dapper in his three piece suit on two occasions, while the lovely Kate had an exquisite new blouse to wear each day.  Such a well dressed and good looking family, I was honoured to be part of their tribe for the duration of our adventure.  Next time we will find a big beret for Bev and an exciting race at the track for Tom.  Thanks Bob for all of the lovely meals we enjoyed together, this was truly a gastronomical tour!

As I write this I am missing all of you Schutzman's and you too Dr. Dean!  See you on the next adventure when we take Nantes by storm in 2021 to climb L'Arbre aux Herons! 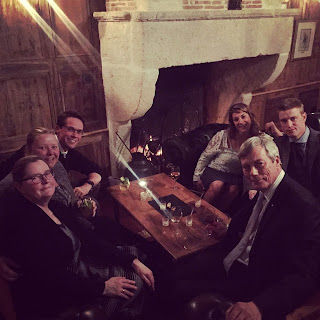