Well, we shopped till we dropped!  21 curious ladies from the Calgary and Sundre area of Alberta were invited to Italy by their travel organizer, Shannon Wolfe, who is passionate about sourcing out fun destinations for this ladies's travel group.  They have been on 6 tours together now, and their next destination is Australia.... have a shrimp on the barbie for me, gals!

Our group started their tour in Rome instead of Naples due to a transit strike in Germany.... the Italians were very surprised to hear that it was the Germans on strike this time, affecting 6 airports in the country!  Regardless the group was saved by the Eurotravel Bus company and whisked down to the Sorrentine Peninsula from Rome.  Lucky girls only started the tour a few hours late and even got to have a prosecco and homemade cake upon their arrival at the Palazzo Jannuzzi.

The Amalfi Coast highway was our first day trip from Sorrento.  The cliffside views and Michele's slow careful driving made it a relaxing day, despite the altitude gained over the dizzying heights! 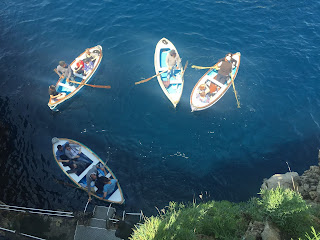 Shopping in Sorrento in the evening with time to relax and enjoy the nighttime buzz of the people in the streets.  The Isle of Capri awaited us the next morning as we filtered through the crowds in Capri to escape to the other side of the island Anacapri.  The slower but higher side of the island is home to the locals, shopkeepers and of course the Blue Grotto.  More than half of the group decided to brave the jagged steps down into the little boats, which then swept them under the cliffside into the grotto.  Such a special cove and grotto warranted a little wine celebration afterward, as we watched the other tourists shuffle in and out of the rock hole in their little boats.  Another small group of adventurers took the Monte Solaro chairlift to the top of the island for the ultimate view of the bay of Naples and the Tyrhrennian Sea!

Knowledgeable Nicola greeted us in the Ancient Roman City of Pompeii the next morning for a tour of the buried town.  Newly uncovered homes and shops were exposed after having been sealed by ash in 79 AD.  We saw the fast food vendors, the crosswalk and we even had to line up to get into the brothel, still the most popular place in Pompeii! 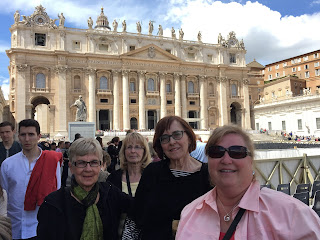 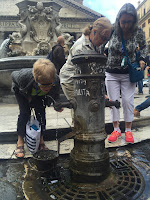 Onwards to Rome where we found our neighbourhood quite posh.  We were situated near the Piazza Cavour and behind the majestic Palazzo de Justicia courthouse.  We wined and dined in Trastevere at CIAK restaurant and enjoyed Carbonara, Cacio e Pepe and even Cinghiale for our first taste of Roman primi piatti.  Molto Buono!!!

It was only a short jaunt the next morning across the Ponte Umberto to meet Domizia and we were off on an architectural tour of Rome, weaving through the streets to the Spanish Steps.  We thew a coin in the Trevi Fountain and drank the waters out of the others!  In the afternoon, some girls with Shannon's guidance climbed the Vittoriano, Rome's 'White House' that looks like a birthday cake.  We made sure to say hello to Papa Francesco at the Vatican City Museums, again with our amazingly funny guide, Domizia. 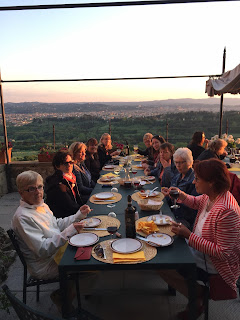 Arrivederci Roma!  A quick train ride to Florence and we were getting settled in amongst the wisteria and rosemary in the gardens of the Pensione Bencista.  Some girls enjoyed a manicure or massage at the Spa, others sank in the views while sipping a spritz! 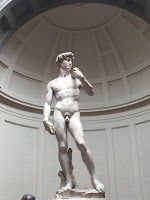 Our date with Michelangelo's David was not forgotten and we took off down the hill into Florence for the day.  After a stop at the Duomo to view the Last Judement by Vasari, we were hungry for more shopping so were led by Natascha to the Leather Market at San Lorenzo.  Most everyone came home with three purses, one for each occasion!

Our next mission was to conquer the Pisa's Leaning Tower.  In two groups we fearlessly stomped up the 250 steps that wind their crooked way up to the sky.  There were many of us holding on to the walls because the tipsy tower makes you feel like you had too much prosecco at breakfast!  We spent the afternoon in Lucca before returning to Florence for a wonderful impromptu antipasto party overlooking the Tuscan countryside. 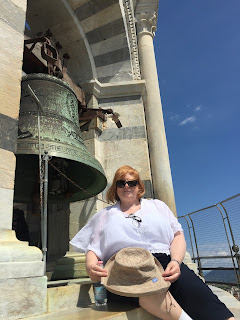 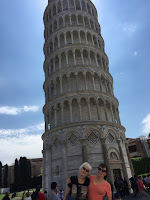 Our last morning in Toscana was spent eating the world's best Gelato in San Gimignano and sipping wine at the Crux Bibbiano winery.  It couldn't have been a better morning to visit the countryside, for the sunlight on the rolling vineyards reminded us of our rural home.

During the past 9 days we got used to the traffic in Italy.  But then we found ourselves in Venice where we found bridges instead of walk-lights.  It was a refreshing change to be amongst the canals of this maze of a city.  We visited the Basilica for Sunday Mass and the islands of Murano for glass and Burano for lace, and a few even took in the Barber of Seville Opera at the Teatro Fenice. 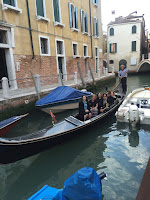 We took every transport option possible, a shiny water taxi, the big smelly vaporetto 'city boat' and the gondoliers came to get us to glide us right up to the Locanda Montin for our farewell meal.  A majestic time was had in Venice! 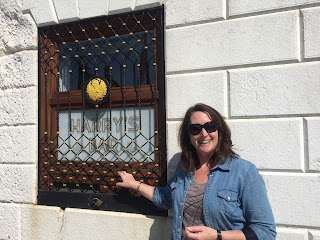 Drops of rain came on our last morning in Italy, our cue to head on home.  Arrivederci Italia and lovely to meet you ladies!  Grazie mille Shannon Wolfe for inviting along such great spirited gals! 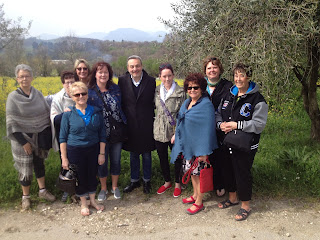 The Countryside of Italy 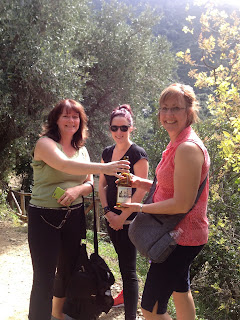 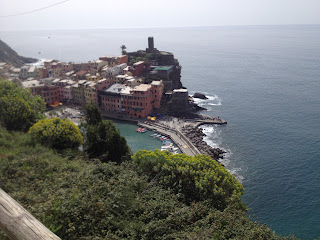 What a pleasure it was for me,Saskatoon girl that I am, to escort 10 enthusiastic ladies from rural Saskatchewan into the countryside of Italy this spring! We started our adventure at Anna’s La Vecchia Quercia in the hills above Salerno on the Amalfi Coast. Anna opened up her villa early for us this spring and as polite Canadians we tolerated the rather chilly temperatures in the rooms for the first couple of nights only to discover that the heating system had malfunctioned – we were toasty for our last night! Of course Anna’s warm welcome with Napolitana cuisine , a tour through her garden and an adventure in cooking gluten free pasta made for a heart-warming stay. Closeby at Rivabianca Bufalo farm we appreciated the process to make this succulent pure white ball of mozzarella cheese. We all had a squeaky taste of this cheese as it was being formed into balls or braids by the Mozzas !  We took in the Greek and Roman ruins as we walked through Paestum and learned all about olive oil production from our friends at Casa di Baal. One of the highlights of our visit to Campania wine region was the personal guiding of owner and wine-maker, Roberto di Meo at his family winery di Meo. In his 17 Century Prince’s palace we enjoyed a lunch of antipasti accompanied by copious amounts of Di Meo wine – Aglianico, Greco di Tufo and Fiano di Avelino! To top it off Roberto offered us some of his special brandy – 40 % alcohol – all this called “ lunch” in Italy! 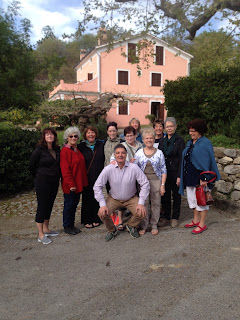 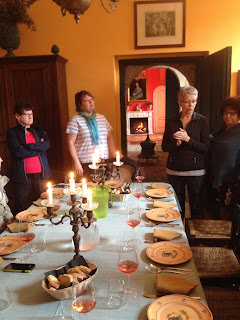 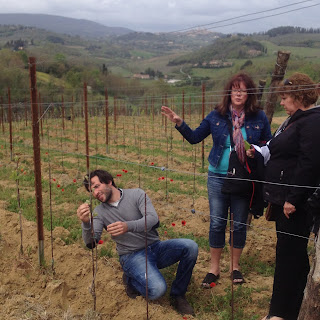 At the beginning of April, surprisingly we lucked out with some beautiful weather all along this tour. On Sunday we made a partial visit to the Amalfi Coast visiting Vietri sul Mare for ceramics and Ravello for lunch and the beautiful gardens of Cimbrone with a precipice overlooking the Mediterranean! Nicola our guide in Pompeii had us visit some newly opened exhibits of Villas and Gardens with frescos still on the walls of this Roman city devastated by the Volcanic eruption of Mt Vesuvius in 79 AD.  Then we slowly, very slowly (due to Sunday traffic) made our way to the Hotel Transatlantico in the old port of Naples – my favourite hotel in all my travels! Our chauffeur GP offered to dine with us on the terrace of this hotel and then stay overnight to transport luggage up to Florence for us – what a lifesaver!!! Thanks GP. Anita Silvernagle our 10th guest arrived in Rome that evening so GP and Chandra made the trek to Rome airport to pick her up and carry on to Florence. Quite the logistics of planning!
At the Pensione Bencista, a former convent (and yes some of the beds were that hard!) we were welcomed by the Simone family whom I have known for 13 years now! What a beautiful setting in the hills overlooking the city of Florence. Our Florence stay had us enjoy the food and leather market before seeing the sights like that handsome “David”!  Soon we were off to Cinque Terre for our stay in the beach hotel in Monterosso – what a cute little village! Somehow the beach bar and the Mediterranean Sea captured the group as the enjoyed an afternoon of sun! Chandra even went swimming!!!! A true Canadian! The next morning 4 of us climbed the 700 and some steps on the path from Monterosso to Vernaza! Yes, we had a wine break at the top and met the rest of the gang who arrived on the train in this village for gelato. Further along on the train to Riamaggiore for lunch and soon Maronibus whisked us off to Lucca, the roman walled city which resisted any invasion by the Florentine Medicci family.
One of the restaurant owners in Lucca entertained our Canadians so well that they went back 3 times for pasta!  What a find! And they spoke perfect English! Lucca is one of the best little places to shop, this resulted in buying another suitcase for some!  Oh yes, and we did see a glimpse of the Leaning Tower of Pisa – fascinating! Although most of the time in Pisa was in Macdonald’s getting a fix of North American food!
Before taking the fast train (around 300 km/hr) to Venice Franko drove through the rolling hills of Chianti (Linda’s wish) where we tasted wine and walked through the vineyards with Mathio of Croce di Bibbiano. Farmers talking to farmers – what we didn’t learn about growing grapes!! The train ride went without a hitch as we were prepared for the luggage ordeal. Thanks to efficient packing most of the gals had no difficulty with their bags on the train as this time we did not have GP to come to our rescue!  The Locanda Fiorita was a stone’s throw away from the San Angelo Vaparetto station and our Prosecco reception was welcomed after our voyage. Venice was a delight and the weather was perfect! Our last day we pooled our coins together and bought a private taxi to the island of Murano to see the glass blowing. Of course you are obligated to visit their show rooms after the demonstration, but they quickly learned that we were not about to buy a 35 000 Euro chandelier and guided us to the Murano glass room full of affordable jewelry. Everyone seemed to pick up a little souvenir of our visit. We persevered the vaparetto to Burano, the lace making colourful houses island for the rest of the afternoon and then decided to hire another taxi to take us home.
A final Prosecco and feedback evening on the terrace of the Locanda and our final Italian pasta meal finished off our tour to Italy!  Thanks gals ! It was a real delight for me to share the countryside of Italy with you! 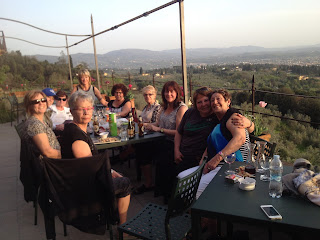