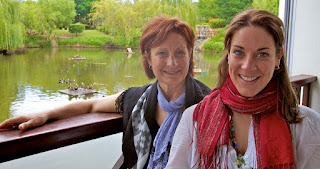 We have found ourselves with an afternoon free at the GR Game Lodge in the Western Cape of South Africa! We're having some down time by the pool after already having seen the "big five" on our sunset and sunrise game drives...but more about that a little later...

We have been busy as beavers (or mongoose would be the appropriate animal metaphor for the region), researching wineries near Cape Town and the Cape region.  Our trip started in Cape Town where we were met by our driver, filmmaker, photographer and Africaans interpreter, none other than Rory Hinds of Mine Films.  Upon our arrival we were whisked to the beach, then we started with the wine tasting in the Constantia Region, just outside the city. We have really been hard at work, learning about the first grapes planted here in South Africa (brought from France, of course) and we discovered that these folks have been making wine since the 1600's!  Our quest was to uncover the secrets of the coffee style pinotage wines here in South Africa, but we are finding that they also make some wonderful white wines, the slightly oaked Chenin Blanc being one to mention.  Other reds are abundant with Cabernet Sauvignon, Pinot Noir and the non-coffee style pinotages, the more refined and subtle way of ageing this grape's juice.

We explored the French Colony of Franshoek to try some MCC or Methode Cap Classique bubbly with one of the best in the region, Haute Cabriere's one and only, Pierre. - he taught us all about the ways of making sparkling wine, and even called up our own Corinne to do "Sabrage"... she opened a bottle of his Pinot Noir MCC with a sword!!

Stellelbosch is a quaint university town with easily another hundred wineries to explore and we had a tour to KWV winery in Paarl where there are some great wineries and restaurants. 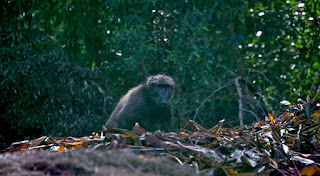 Corinne the adventurous did a horseback trek atop an English saddle at Diemersfontein Winery, and we took part in a wine walk through the vineyards near Wellington, only to happen upon a pack of Baboons in the vineyards, lurking about and looking for some rotten grapes still hanging on the vines!

Next we spent two days at a luxury guesthouse the Shoelphoek in Hermanus.  The food was exquisite, cooked by the owner himself, Chef Mannes.  Petro, his wife, hosted us in their cellar of 12 000 bottles and showed us the numerous opportunities for marine adventures in the area, such as shark diving and whale watching!  And just as we thought that we would get a break from the wine tasting we discovered Hermanus' newest attraction, the Hemel en Aarde valley, a wine growing region with at least 20 wineries (and growing), most named in accordance to the valley's English translation, "Heaven on Earth"!

Lucky us are currently staying in bush chalets, or round huts that look over the watering hole and game park.  I have just taken a photo of a giraffe walking nearby, with my smart phone!! 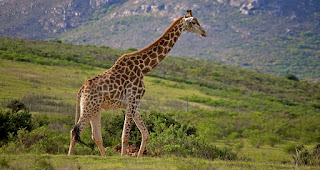 Last night we met the baby white rhinoceros, Oliver who was munching grass next to his mother and grandmother.  Our buddy the Ostrich in heat entertained us with his pink legs and beak while he did a mating dance - you see, he was in love with a female ostrich from the farm next door... talk about a doomed romance!!  This morning we saw the pair of lions, the elephants, also a pair.... and the Cape buffalo reminded us that they are the most dangerous of the big five with their bulky stature and horns! 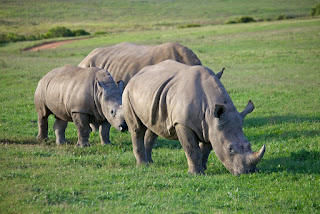 Next up we are on to Plettenburg Bay to spend some time with Rory's family.  We will also eat oysters from Knysna, bungee jump the 216m Bloukrans Bridge, research some monkeys and more elephants and lastly visit the Tskisikamma Forest near Port Elizabeth where our South African adventures will come to an end.

We hope this message finds you all happily involved in your own adventures and we hope to bring you back to South Africa one day!  This place is truly amazing and we know you will love it!!
Totzints (bye for now)!! 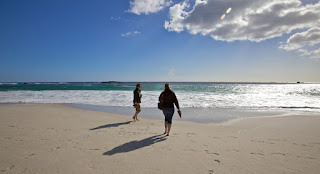 Your window on the world of wine...
and beaches, culture, wildlife......