I first met Alexandre in 2002 on a Transatlantic flight to Paris. Alex is an artist www.alexathane.com 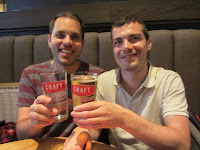 and he has been pretty much confined to his small Paris apartment  for the  last 9 years.  My constant invitations for him  to see the wild west of Canada finally lured him and his friend Stephane to visit us in Fernie this summer. The weather could not have been more perfect and if any of you have spent time in Canada this year, warm days were few and far between.
The "Paris boys" only had 5 days in the Rockies but they were action packed.  Of course we had to drive them through Banff National Park and after many hours on " Bear Watch" we came up with a few sheep and deer - oh well something to look forward to on their next visit.  On our descent through the Columbia Valley to Fernie we stopped at one of our favourite spots Lussier Hot springs, a series of hot to warm to cold pools aside a briskly flowing stream high up in the mountains on the road to Top of the World Provincial Park.  Now this was quite an introduction to the wild west!
With our base on the ski hill in Fernie Alpine Resort we put Alex's hiking boots to the test - and his new boarder style swim suit!  I think speedos are still the rage in Paris! Off we were hiking in the Old Growth Forest with 800 year old cedars that survived the forest fires in the early 1900s. Destination, Island Lake Lodge for a picnic and some fishing. Fishing fanatic Stephane had brought his bayonnet "canne a peche" all the way from France so he had to test it out. Unfortunately the lake around the island has not been stocked with trout since 2002 so it was an excercise in futility particularly when we were sharing most of the air space with a multitude of fish flies. No harm done, just alot of time spent shooing them away. Did you know that they do not move as fast as mosquitoes? 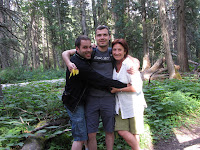 We spent some time on the water the next day as we were invited by our friends Isabelle and Jim to sail on the Koocanusa reservoir. No wind meant a little motor sail boat ride while their son Paul explained the rigging, then back to human powered manoeuvring of the lake kayaks. Since it was such a beautiful day we decided to give them the thrill of their life at Silver Springs near Elko.  A 15 min. hike up through a throng of mosquitoes found us at a crystal clear lake just waiting for us to break its image with a plunge  from a 10 foot , then a 30 foot precipice. You can see the hesitation on Stephane's face as he advanced towards the edge with his feet and yet his upper was saying "NON!"  A late night fresh BC salmon on the BBQ finish the day. Stephan helped me whisk up the most delicous hollandaise sauce to top it off. 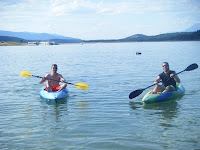 Boohoo, our last day together in the mountains. Being the weekend we were able to take the Timber High speed quad chair to the top of the ski hill, then we navigated our rocky climb to the very top of Elephant head - those boots were made for hiking and thats just what they'll do!  At an alititude of almost 7000 feet Stephane found a cute little araignee or spider which he gleefully showed to Alexandre and myself but when I informed him that it was actually a tick ready to bleed him dry he commenced to throw it off the cliff. Goodbye little one!
After a  little ride him my 1973 porsche and a visit to the Lizard Creek hot tub the Paris boys in Fernie visit came to an end. No bears or moose this time, but we have to leave something for their next visit.  With all the travelling that we do as a family through our business VM travel adventures showing the Paris Boys around British Columbia reminded us of the great country we inhabit! Always great to escape to foreign lands, but Canada always welcomes us back with open arms. We are VERY proud to be Canadian!


We, Corinne and Natascha are both are very pleased to announce that we're happily working away in the office in Fernie this summer!  Besides planning your tours we have taken advantage of the recent lovely weather to get out into the Rocky Mountains!


Saturday of the long weekend was spent hiking up in the mountains in the Elk Valley, specifically up the wet and wild path of the Coal Creek Drainage.  12 of us outdoor enthusiasts left Fernie Alpine Resort to join our fearless leaders Sachia and Linda  - the unofficial back country guides - on a hike to "The Ammonite".


An ammonite is an extinct type of cephalopod, related to cuttlefish and octopus.  The spiral and ridged shape of the ancient sea creature was named after the horns of the Egyptian God Ammon, who legend states, had horns.


Our Coal Creek Ammonite is one of several smaller fossils found in the Fernie area.   The size?    This specimen measures about 1.5 metres across and was 35 centimeters thick, the body spiraling out from the center of the shell.  The imprinted fossil in the rock is complimented by the lower half of the body which remains embedded, as the shell had once filled with sand. This big guy used to swim around in the Jurassic Sea some time ago, between 200 and 145 million years back, then with the formation of the mountains, was lifted up high, waiting to be discovered for as many years!


It was wonderful to hike with old and new friends, although this year's rainfall made the trek much more treacherous!  Hikers, make sure you all have good footwear, and don't be afraid to get a bit muddy! 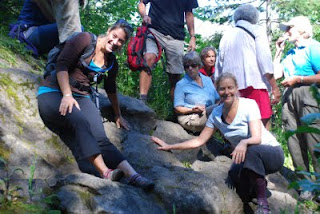 Happy trails... come out and join us next time!  Life is too short not to have this much fun!