Along the Impressionist Path 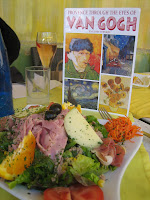 The Impressionist Art Tour of France is a tour that Voyages Millefleurs offers every spring. The abundance of poppies in Provence just makes it the right time of the year to follow the footsteps of these renegade artists to discover what moved them to paint " en Plein Aire" - (outdoors) when the salons of the 1800's were only accepting works of art the " followed the rules". However, Mte. Ste. Victoire near Aix-en-Provence evoked sensations in Cezanne to paint it over 80 times and the brilliant sunshine in Provence enduced flaming colours in Van Gogh's palette.

We start our tour in Cagnes-sur- Mer just north of Nice. Actually Jane from California arrived a day early and I invited her to research Renoir's studio with me. After many wrong turns (just never sure which way those brown signs are pointing) we found this oasis of olive trees that Renoir spent his last years protecting. Still today one can enjoy the tranquility of this park surrounding his villa and know that his efforts were not in vein. His house and studio stand untouched from modernity - just as if he and his family still inhabited this sacred place. This was a delightful find for Jane and I and we talked about it for days after.

After the other two guests arrived we were off to Mont Ste. Victoire and Cezanne's studio. A very similar experience to see where this famous artist spent his final years painting his mountain over 80 times. Many of the objects he painted were still present in the studio and we had fun finding them in the prints of this paintings on display. His painting smock hung in the corner - imagine having the chance to touch it - not that we did! We drove along the path that he walked every day to the tour where he painted Mont Ste. Victoire. It was a long way and it was hard for us to imagine him making the trek and back every day!

South of Avignon is Van Gogh country. Although he only spend 18 months in Provence he produced over 300 works of art. Some of them were given to farmers in exchange for eggs and they often ended up to be doors on the chicken coops. Imagine - now these same painting sell for millions of dollars. I am always impressed with the Van Gogh Foundation and the education they provide for visitors. Tableaux of his paintings are appropriately placed in the spots where he painted them so you see what he saw and you read what he thought at the time of the painting. I have searched a long time for the actualy billard table used in this tableau " Les billiards" and finally found in upstairs in the Cafe Van Gogh - just where it was when he painted it.
A special place to really feel Van Gogh is St Paul Maussole just outside of St. Remy de Provence. Here he spent some of this most prolific days in an assylum - irises, poppies, olive trees , cypress trees! The Foundation has created a lovely tribute to Van Gogh in this setting which still uses Art Therapy to treat the mentally unstable residents.

After a week of enjoying a Provencale sky and the fields of poppies we took the fast train to Paris. The Musee D' Orsay (arrive early and go to the back of the converted train station and to the third floor to get a close up view of the works of all the impressionist artists) , the Musee Marmottan, a small Parisien manor dedicated to Monet with other impressionist too, the Orangerie - new home to Monet's huge Water Lilies, but a nice surprise to see the works of many well known impressionist artist in the basement - Renoir, Degas,etc.

Of course we had make the 1 hour excursion to Monet's Gardens at Giverny - flowers in abundance. I love taking some time to do some sketching in this tranquil environment. This time a little school boy was convinced that I was Monet's wife - he saw me sketching - and he wanted to buy my sketch for 7 euros (that's all he had)! Now isn't that a laugh! In the countryside too is Auvers-sur-Oise where Van Gogh is buried next to his brother Theo. We paid our respects and stopped at the Blue Cathedral that he painted in one of his final days. It was here that he shot himself and died a couple of days later. The Maison Van Gogh one the main street where he ldied is open to visitors. The Chateau d' Auvers is a restored 19th century castle which presents a Voyage du Temps. As you walk through this presentation you come to understand the lives of the impressionists, what they painted and what inspired them. A trip to the countryside is a must, but take time to enjoy the Butte Montmartre in Paris where they met to inspire each other.

Voyages Millefleurs offers this tour every year. I always learn something new! Hope you will join me sometime. I invite you! Corinne
Posted by Corinne Thomson & Natascha Radchenko 2 comments: