An Adventure in Argentina


After 10 years of collaborating with Cecelia and Mel Jurgens to offer Sketchbook Workshop Tours around the world, this year’s Adventure in Argentina sadly missed the Jurgens family as they mourned the loss of Mel, husband and father and a solid support for our artist friends!
The artists theme was always present during the tour as former students of Cecelia and new beginners encouraged each other to capture the beauty of Argentina in their sketchbooks. A few days in Buenos Aires had us visit the colourful barrios of La Boca and San Telmo for tango in the streets and artisan fares! A guided walking tour of downtown Buenos Aires including the Plaza de Mayo, the Casa Rosada and San Martin’s tomb in the Cathedral  was followed by a lunch in the famous Tortonis. Here we discovered how grande a grande cerveza really was!!
After a couple of days in this city of 16 million we were whisked off to the tranquility of the La Cantera Jungle Lodge at Iguazu Falls. And yes, we got totally wet as Romina guided us along the upper and lower catwalks on the Argentine side of the falls and gleefully set us off on the Grand Adventure boat ride in the deluge of these massive water falls – one of the wonders of the Natural World. 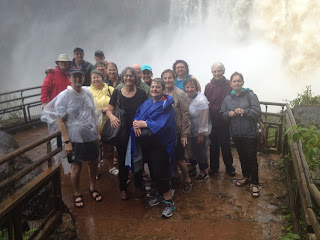 Another short flight took us to Salta, one of Argentina’s northern provinces with a strong Inca influence. One cannot imagine the intense colours of the mountains in this province. Some of us enjoyed capturing these ocres colours in our sketchbooks and all enjoyed Andres Hoy’s informative tour of the El Esteco winery!  Cafayate is the small microclimate of Salta’s wine production specializing in Torrontes and Tanat at high elevations. All yummy! As was the food!
Some of our guests delighted in consuming  beef specialities from all parts of the animal – inside and out in the typical Argentine Parrilla. Others tried goat and alpaca along with other delights of the Argentine meat based diet! Salad? What is that?
North of Salta in the Andes, Pumamarca in the province of Juyjuy was a highlight. We followed Leo our guide to the top of the Red hill for spectacular views of this little pueblo with its market and the hill of seven colours. Some of the group managed to find local music in one of the outdoor restaurants while others shopped for local artisan gifts. 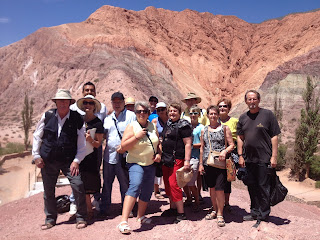 Soon we were back in Buenos Aires for some museum days, the Palermo gardens and a delightful Dinner Tango Show at Café de los Angelitos! A few adventuresome souls learned how to tango with Trini and Juan Carlos and then were swept off their feet in the oldest tango hall in BsAs,  Confeteria La Ideal as they put their steps to practice with the tango escorts! 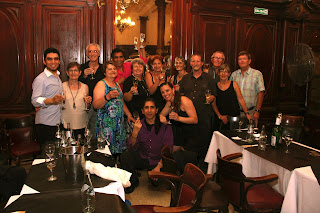 Thanks to the whole group for pulling together in the spirit of the Jurgen family to make this another delightful experience for all!

I AM NOT THE JUDGE BY STEVE FINNELL

JESUS WILL JUDGE ALL MANKIND.

John 5:22 "For the Father judges no one, but has committed all judgment to the Son,(NKJV)

John 5:26-27 "For as the Father has life Himself, so He has granted the Son to have life in Himself, 27 "and has given Him authority to execute judgment also, because He is the Son of Man, (NKJV)

All men will be judged by the word of Jesus.

Mark 16:16 "He who believes and is baptized will be saved; but he who does not believe will be condemned.(NKJV)

I am not the judge, however, I believe Jesus when He said, "Those who believe and are baptized will be saved".

John 3:3 Jesus answered and said to him, "Most assured, I say to you, unless one is born again, he cannot see the kingdom of God."(NKJV)

John 3:5 Jesus answered, "Most assuredly, I say to you, unless one is born of water and the Spirit, he cannot enter the kingdom of God(NKJV)

I am not the judge, however, I believe what Jesus told Nicodemus is true. Jesus said "One has to be born of water [immersion in water, as in baptism] and the Spirit in order to enter the kingdom of God.

The words of Jesus are that of the Father, and the words of the apostles are the words that Jesus taught them.

John 14:24-26 "He who does not love Me does not keep My words; and the word which you hear is not Mine but the Father's who sent Me. 25 "These things I have spoken to you while being present with you. 27 "But the helper, the Holy Spirit, whom the Father will send you in My name, He will teach you all things, and bring to your remembrance all things that I said to you.(NKJV)

Acts 2:38 Then, Peter said to them, "Repent, and let everyone of you be baptized in the name of Jesus Christ for the remission of sins; and you shall receive the gift of the Holy Spirit.(NKJV)

I am not the Judge, however, I believe that the apostle Peter was speaking by the authority of Jesus when he said repent and be baptized in order to receive forgiveness from sins, and then you shall receive the gift of the Holy Spirit.(NKJV)

I believe the 3000 on the Day of Pentecost that believed, repented, and were baptized were born of water and the Spirit. They were born again.

I am not the judge, however, I believe we will all come before the judgment seat of Jesus Christ and be judged according to His word.