Not only does this term refer to the delightful jellied sweet originating in this city of Istanbul, but also the delightful surprise we experienced in our recent visit to Turkey.  It was easy being a tourist here – the food was colourful and delicious, the Turks speak English, they are happy and cheeky…Natascha’s term for them.  Everything is very well organized, it is SAFE – no worries of stolen passports – the only difficulty was learning the local language and we did take a stab at it!  Really, visiting Turkey is a “ delight” – a real pleasure. 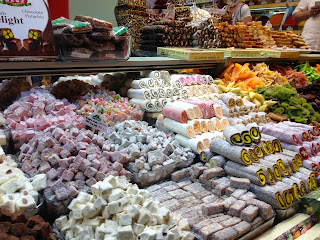 We stayed in the middle of the action in a neighbourhood called Sultanahmet. In fact I arrived on May 5 – celebration of spring with singing, dancing and drinking in the streets. Quite the welcoming party!!! Natascha and I and our good friend Isabelle decided to explore this country together. After some pointers from Umit (Humid as Izzy called him) front desk manager at the Best Point Hotel, we set off to visit the major sites within walking distance: Blue Mosque, Hagia Sophia, Basilica Cisterns and Topkapi Palace. He lent us his tram card to go further afar to the Palace Dolmabahçe, Sultan’s palace since the 1800s totally decorated with elaborate 4 tonne chandeliers and reception rooms for guests. Mustafa Kemal Ataturk spent his final days here.  The Galata Tower was close by, but after queuing to climb the 400 stairs of this 1451 tower we found out that the only way up was by elevator. Did seem worth $12 not to climb it so we went for wine instead and met a Turk who invited us to view the Bosphorous straight from this Penthouse apartment!!! Better view and no ticket… how could we refuse?! Yes, we met some great people – really genuine hosts. Certainly the restaurant owners or the carpets sellers tried various charming techniques to entice us into their shops, but a kind no thanks from us was sufficient to give them the message. 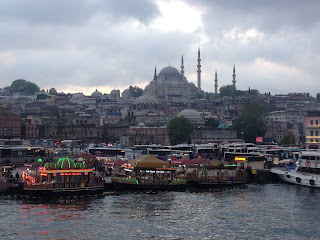 We fell in love with Istanbul, but wanted to go further afield to the Cave dwellings in Cappadocia and the Hot Air Balloon ride. Over 13 companies now launch over 100 balloons over this volcanic countryside every morning at 5am. We hiked the valleys, entered the underground city and witnessed the twirling trance of the Whirling Dervishes. We could have used one more day in Göreme, but alas we found a rare flight from there to Izmir and we jumped on it instead of the alternative overnight bus ride of 15 hours. 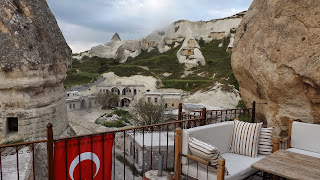 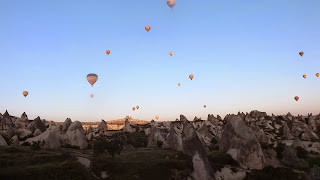 We found some beaches for Izzy in Selçuk (the smaller town near Ephesus) and managed to spend a couple of hours each day for the next 4 days on the Aegean Sea. Mahmet, our guide in Ephesus gave us a very passionate tour of this ancient site and slowly the history of this area spanning over 4000 years started to take a foothold in our minds. Hadrian’s fountain, the infamous Library and the 20 000 person amphitheatre came alive with Mahmet’s stories – and he had a few!!!  Our visit to the small hillside town of Sirince had us taste wine from the area and dine with home cooked specialities. We stayed at the Nylia, a small hotel in Selçuk where we enjoyed a copious breakfast in the courtyard. Again, well situated to the town center, the bus station and the museum. 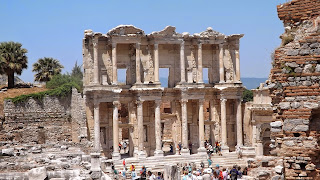 From here, Izzy made her way back to Istanbul to join her friends on a bike trip in Belgium. Natascha and I endured the long bus ride up to Çanakkale where we participated in a tour of Ancient Troy and Gallipoli, the latter being a pilgrimage for Auzzies and Kiwis as they honor their soldiers in a battle that resulted in many deaths including the Turks. Ataturk’s reputation as a strong leader for the new republic of Turkey in 1923 was apparent in the commemorative statues dotted over the Gallipoli peninsula. 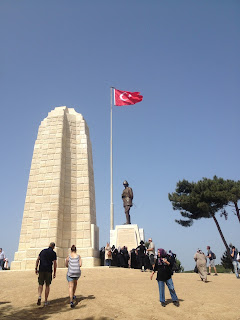 Back to Istanbul for a couple of days to check out a few more sites, buy our Turkish lamps, do a quick sketch of the Blue Mosque from our roof top terrace and pack our bags for our next adventure. It won’t be long until we visit this “delightful” country again. Tesekkur Ederim to our new friends in Turkey!