This Fall a group of adventuresome artists from Saskatchewan joined instructor Cecelia Jurgens and Corinne of VM Travel Adventures on a Sketchbook Workshop Tour of Europe’s best “fairytale” countries. The Wiechmann Hotel in Amsterdam situated on a corner of one of the 9 little streets gave us lots of sketching opportunities: crooked houses that looked like they were going to topple into the canal, bicycles and geraniums that decorated the bridges.  Of course our day in the countryside to visit the windmills at Zaanse Schans and taste some cheese in Volendam gave a different perspective to this flat country called the Netherlands, most of it below sea level.  The Van Gogh museum was a delight as we had a close up look at his Sunflowers and Apple blossoms. Some shopping time too as we dared to be pedestrians on the streets where most Dutch were on bikes with children and groceries as their cargo.


The fast train transported us to Frankfurt, then Baden Baden and finally Offenburg in the Black Forest where we unpacked for a whole week in the Stadt Hotel. The village of Gengenbach is 1280 years old! Yes, lots of history here including the statue of a knight from 1571 in the town market square.  Robert, our bus driver spent the first 5 days confusing us as to which country we were in. With the Alsace, France being just across the Rhine we spent a few glorious, sunny days painting the half timbered houses and vineyards of this unique region that has been handed off between France and Germany many times over the years. This accounts for its unique culture and interesting food. We enjoyed a lovely French meal in Mittelbergheim, a restaurant that Corinne knew of from her days as a teacher in Lahr. A somber moment was at the Studhof Nazi Concentration Camp in the Vosges Mountains, but the mood was soon lifted with an impromptu stop at a winery in Ottrott. 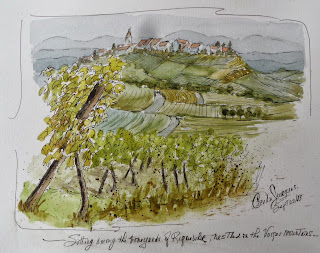 Our days in Germany were sunny and warm as we painted the massive Black Forest Houses that had family, beast and fodder all under one roof. The Gutach Open Air Museum was a tranquil setting for sketching. This was followed by a meal of freshly caught trout at the Gasthof Kreuz in Prinzbach. Yes, for some the heads and tail had to be removed before it was consumed.  Eight of us had the energy to climb to the top of the 13th century Geroldsech castle ruins for more sketching. Our final day was a drive through the Black Forest to stop for Black Forest cake and yes, more shopping before visiting Triberg Falls and Villigen. It was a holiday in Germany on this day and thus the stores in Villigen were closed. This probably saved a few overweight charges for the return trip home.


With 6 sketching sessions and 2 critiques, Cecelia managed to encourage us all on our journey to become artists!  Danke schoen! 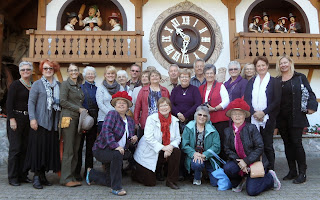